This article is for the original Diep.io Annihilator. For the Arras.io equivalent, see Arras:Annihilator.

The Annihilator is one of the four final Upgrade choices from the Destroyer that may be selected at Level 45.

⬆
The Annihilator has low Bullet Speed and Reload, but has Bullet Damage and Penetration equivalent to the Destroyer. The Annihilator suffers from extreme recoil that knocks it back (6.8 background squares) when firing. In general, it serves as a harder-to-avoid version of the Destroyer, since, upon Upgrading, Bullet size is increased. Compared to the Hybrid and Destroyer, its reload is the same, and has a higher recoil and moves back faster overall. The Annihilator has also been noted to be more powerful than the Destroyer because the larger Bullets are more difficult to avoid, making it easier to kill opponents. 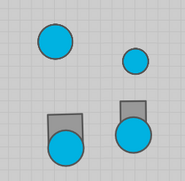 Comparison of bullet sizes. Annihilator on the left, Destroyer on the right.

The Annihilator’s upgrade button.
Add a photo to this gallery
Tanks (Diep.io)
Retrieved from "https://diepio.fandom.com/wiki/Annihilator?oldid=478223"
Community content is available under CC-BY-SA unless otherwise noted.