This article is for the original Diep.io Arena Closer. For the Arras.io equivalent, see Arras:Arena Closer.

For the event that occurs when this tank spawns, see Arena Closing.

Arena Closers appear when a match of Domination, Tag, Mothership (not available anymore), or Survival is finished or when a server closes in Free For All, Maze, 2 Teams or 4 Teams. Its smaller version is playable in Sandbox, when using the \ key several times. However, it is impossible to do this method as of October 2020, as Arena Closers and other special tanks have been fully removed from Sandbox mode.

The purpose of Arena Closers is, as their name implies, to close the server; players killed by Arena Closers are then kicked from the server, then the server restarts when all players are killed off the arena. However, if the player manages to survive them (e.g. by activating God Mode on Sandbox), the player would still be kicked out from the server after a couple of minutes. Unlike getting killed by regular tanks, Dominators, Motherships, or Bosses, you will restart back at level 1 when you are killed by an Arena Closer only once. However, their levels are kept in Free For All, 2 Teams and 4 Teams. Arena Closers don’t have a health bar, so they cannot be killed. Their bullets do three times as much damage as an Annihilator.

The standard Arena Closer features a large yellow circular base, with a cannon that is similar to the back of a Flank Guard. It is about as large as a Dominator, and the bullets it fires are about as large as an Annihilator bullet. In Sandbox, it takes on a blue color and is several times smaller than the average Arena Closer. The yellow variations’ color is same as the Square’s, Summoner’s, and neutral Dominator’s color.

Several Arena Closers (with a maximum of 16) will spawn when a Domination or a Tag match is finished. In 2 Teams, 4 Teams, or in FFA, the Arena Closers appear when only a few people are in the server or when the game is being updated. In Maze when the server has been up for 5 hours. Arena Closers may spawn outside of the boundaries of the map, in which case they will immediately target a player and move inside.

When they attack, they will shoot at the target while ramming into them. When all targets are dead or neutralized, their AI has no reason to continue to fire, so they’ll be spinning and slowly drifting in a random direction, just like regular Polygons.

The Yellow Arena Closer has:

In Sandbox mode, the playable Arena Closer has the health of a normal tank, but their bullets are still far more powerful than that of any other tank, approximately equal to a real Arena Closer.

Please note, before reading the bottom lines, the playable arena closers have been fully removed from sandbox, making all these strategies impossible to do.

As the Arena Closer

There is no real strategy to use when playing as the most powerful tank in the game. However, you must be vigilant when other Arena Closers are present in the server, as they are one of the few tanks who can easily defeat you. Outmaneuvering them is usually the best option, but in a perfect 1 versus 1 situation, the winner is usually the Arena Closer who succeeds in landing the first hit.

Against the Arena Closer

Arena Closers in the Sandbox Mode can only be easily taken on by other Arena Closers. Other tanks with massive health pools, such as Dominators which may stand a chance as long as they are careful to stay far away. All other tanks cannot stand the power of the Arena Closer.

If it is distracted, with a Ranger / Stalker or Streamliner, you could have a few chances to kill them at the range since you have better FoV. You also have a slight chance of Killing an AC with the Overlord when spreading your drones at the AC.

A fast rammer like the Booster might not work. However, skilled Boosters can dodge the bullets and ram the Arena Closer.

Yellow Arena Closers are essentially invincible, so fighting them is not an option. Escaping is virtually impossible, as they are faster than the Fighter, Tri-Angle and Booster class, even with fully upgraded Reload and Movement Speed combined you could not escape from the Arena Closer. However, if all of the Arena Closers are stacked atop each other, then the bullet onslaught can be dodged. This is a very rare situation, as it is hard enough to stay alive that long.

Old Yellow Arena Closers are essentially invincible like current Arena Closers, so fighting them would still be hard but you could slow them down by using the Triplet or Tank Bullet Spammers. You were also capable of running away from it by using level 8 Tank (with maxed out movement speed), Tri-Angle, Booster, and Fighter (with maxed out movement speed and reload) because in an old version, Arena Closers were as small as a level 45 tank. This would make an Old Arena Closer as fast as our tanks. They also did not do as much damage so it was possible to out-penetrate them with large bullet spammer hoards or with Destroyer branch tanks. 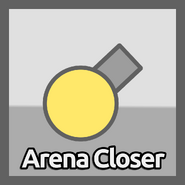 How Arena Closers used to look.

When killed by new Arena Closers