Cannons (3)
The Artillery is one of the current Tier 3 Tanks in Arras.io in Arras.io that may upgrade from the Machine Gun or Pounder at level 25. The Artillery may further upgrade into the Mortar, the Ordnance, or the Beekeeper. The upgrade key for this Tank is Y for Machine Gun and I for Pounder.

The Artillery has a circular base and a somewhat large Cannon mounted on its front. Behind the Cannon are two smaller Cannons, angled at about 11.25 degrees from the large Cannon.

The Artillery, when upgraded to, replaces the Cannons with one big and two smaller Cannons mounted at the front, angled at 11.25 degrees. The smaller Bullets fired by the Cannons can kill a Square in around 2-4 hits with max Bullet damage, while their reload is about two times that of the center Cannon. The center Cannon has somewhat low reload and somewhat high damage. 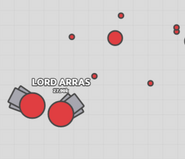