This article is for the Arras.io Auto-5. For the original Diep.io equivalent, see Auto 5.

The Auto-5 is one of the Arras.io Tier 4 Tanks and one of the current upgrades from the Auto-3 at Level 45 and may not upgrade further. Its upgrade key is Y.

The Auto-5 features a circular base mounted with 5 auto-turrets 72º apart from each other.

The Auto-5 retains the auto-spin and auto-fire effect from the Auto-3, but with 2 more auto-turrets, giving increased DPS and firepower. The Auto-5 is more efficient for kills in Arras.io than in Diep.io for the main reason that in Arras.io, the Auto-5 automatically shoots enemy tanks. 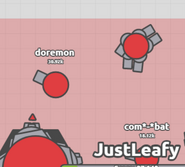 A ramming auto-5(picture by ettette)
Tanks (Arras)
Community content is available under CC-BY-SA unless otherwise noted.