The Auto-Assassin is one of the Tier 4 Tanks in Arras.io that upgrades from the Assassin upon reaching Level 45 and may not upgrade further. It was released on June 2, 2018. Its upgrade key is Y.

The Auto-Assassin is an Assassin with an Auto Turret mounted on top of it. In other words, this tank is equipped with a frontal ranged cannon and a single auto turret.

Upon upgrading from the Assassin, the tank will gain one Auto Turret. The turret is good for farming extra Polygons and with minor additional damage output, as well as repelling rammers but not as radar because the Auto-Assassin has a greater FoV of 31 grids.

No stats are changed upon upgrading, but the Bullets are faster than average and reload is less than average. 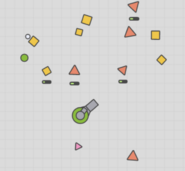