This article is for the Arras.io starter Tank. For the original Diep.io equivalent, see Tank.

The Basic is the first variation of Tanks in Arras.io that the player can use once they spawn. It is currently the only Tier 1 tank in Arras.io. It possesses one Cannon which shoots one Bullet at a time in a straight path, with slight recoil. The Basic may further upgrade into the Twin, Sniper, Machine Gun, Flank Guard, Director, Pounder, or the Trapper at level 10. It may also upgrade into the Smasher at level 25, and into the Single at level 45. Although it now upgrades into the Pounder at level 10, that tank was removed, and months later, brought back. On April Fools’ Day in 2018, the Basic was also able to upgrade to the Master, a joke tank which was quickly removed.

The Basic features a circular base with a Cannon mounted at the front. The Basic’s color and the color of its ammunition are decided by which team it belongs to in team modes, or whether the tank is yours in FFA modes.

The Basic has very average stats, its Bullets can kill the Squares in 5 hits, the Triangles in 19 hits, and the Pentagons in 48 hits without any upgrades and with a Level 1 Basic. Its movement speed gets slower as the Level gets higher. It has 20 HP without any upgrades, around the same as 2 squares.

Basic when its idle. 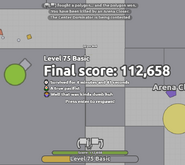 Basic and the glitch. The bullet speed makes the bullets space farther apart, and so it doesn't look like it's shooting faster than Streamliner.