The Boomer is an Arras.io Tier 4 Tank that upgrades from the Builder at Level 45 and does not upgrade further. The upgrade key for this tank is H.

The Boomer has a round body with a Launcher on its front. The Launcher has a trapezium base, a rectangular extension, and at its further end another trapezium the longer base of which faces forward. As so it looks somewhat like the Single plus the Trapper.

The Boomer uses a unique ammunition called Boomerangs, which look like small Alpha Pentagons (pentagons with slightly concave sides and the size roughly that of a Machine Gun bullet).

As an upgrade of the Builder, the Boomer launches a type of trap called a Boomerang, which works exactly as the name implies. The Boomerang, once shot, will fly off, hover at a maximum distance, rebound and then gravitate back to the player. The lifespan of a Boomerang does not depend on when it returns to its owner. It may disappear before that or continue to follow its owner for a while after returning (though this is usually irrelevant as the tank body will cover the whole Boomerang unless the Boomer's movement speed is very high compared to its bullet speed).

There are three ways to control the trajectory of a Boomerang:

A Boomer defeating a Factory.

The Bent Boomer, an unused variant of the boomer. 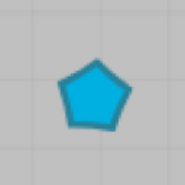 A Boomerang, which looks like a small Pentagon.
Tanks (Arras)
Community content is available under CC-BY-SA unless otherwise noted.