The Builder features a circular tank body as a base with a single Launcher mounted at the front.

Base Stats
(compared with Trapper)

Upon upgrading to the Builder from the Trapper, the Launcher becomes a fusion of the Pounder's Cannon width and the Trapper's Launcher design. The Traps, called Blocks, can move as far as the FoV and can be shot and directed with accuracy and speed by clicking on the spot on your screen using the pointer/cursor. 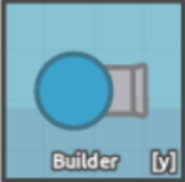 Upgrade button from Pounder
Add a photo to this gallery
Tanks (Arras)
Retrieved from "https://diepio.fandom.com/wiki/Arras:Builder?oldid=479200"
Community content is available under CC-BY-SA unless otherwise noted.