Spawners (3)
The Carrier (originally known as the Battleship during early development) is one of the current Arras.io Tier 4 Tanks that can upgrade from the Cruiser. It may not upgrade any further as it is at the end of its upgrade line. Upon upgrading, another Spawner is added at the front, and the others are spread apart, along with a FoV increase. It is upgraded to by pressing the _ or I keys, depending on which tank the player is.

Upgrading from the Cruiser the Carrier gain an additional Swarm Drone Spawner at its front and the other two now divert from the tank's longitudinal axis. Including its FoV (roughly 27.5 grids), nothing else changes. 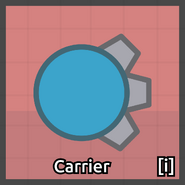