Not to be confused with the Rogue Celestial, which is a similar Boss but does not appear in Siege, or Ragnarok and Kronos, both being the possible final Bosses of the game modes, all having multiple layers for bodies.

“The world tremors as the celestials are reborn anew!”

The Celestial is one of the Bosses found in Arras.io. There are five possible variants of it, with all of them being found mainly in Siege, first appearing on the 13th wave, and otherwise spawn very rarely in other Game Modes. Due to every variant having multiple strong weapons and high health, the Celestial variants are tied on being considered as the 4th strongest Bosses in the game, behind Ragnarok, Kronos, and the Legionary Crasher, the former two being similar to Celestials, and could potentially be considered incredibly strong celestials, and all three of these serve as final bosses for the gamemode Celestials star in.

All five Celestials have three Polygon layers. The top layer is a pentagon, the middle is a heptagon, and the bottom is a nonagon. The pentagon, heptagon, and nonagon layers also have five, seven, and nine weapons equally spaced to their sides, respectively. Every single one has Trapper Auto Turrets for the nonagon layer.

The Purple Blue Celestial, also known with its name Paladin, has Swarmer turrets for its top layer, unique Pentagon-shaped drone spawners for the middle layer, and Trapper auto turrets for its bottom layer.

The Light Red Celestial, also known with its name Zaphkiel, has Skimmer turrets firing missiles in similar appearance to Elite Skimmer’s missiles for its top layer, Overlord spawner turrets for the middle layer, and Trapper auto turrets for its bottom layer.

All Celestial variants have very high health and extremely powerful weapons. While each Celestial has differing weapons from each other, they all use their Trapper auto turrets as their main defensive weapons. Despite taking the appearance of auto turrets, they do not seem to directly face and target players, and rather act more similarly to an auto-firing and auto-spinning Tri-Trapper.

All of Celestials’ adjacent layers tend to spin on different directions, with the topmost and bottommost layer of most Celestials spinning clockwise, while the middle one spins counterclockwise.

A Celestial spawning or about to spawn has an accompanying unique notification: “The world tremors as the celestials are reborn anew!”.

Paladin’s Swarmer Hives act similarly to the playable Swarmer’s, but unlike the latter, Paladin’s version quickly loses speed and stays immobile in place, spawning Hive Drones until they despawn or are destroyed. Both the Hives and Drones appear to be stronger than Swarmer’s.

The Pentagon drones it spawns are quite slow, but has a fairly high health, and deals fairly high damage when colliding with.

Paladin has the slowest movement speed of the five typical Celestial variants.

Freyja’s Auto-4 turrets fire bullets that travel at a fairly fast speed, allowing to reach some distance. They also have decent Reload.

Its Cruiser turrets fire Swarm Drones that also move at fast speed, allowing them to travel some distance before despawning or hitting something. The turrets seem to have the same Reload.

Freyja appears to have the fastest movement speed of the four typical Celestial variants, although still slow compared to other entities in the game.

Zaphkiel’s Skimmer turrets fire Missiles in shaped likeliness of Elite Skimmer’s hyper missiles, albeit smaller. These missiles travel rather quickly, leaving a trail of bullets on its way. The missiles deal high, potentially lethal damage upon direct hit on a tank, while the bullets deal lower damage, although their numbers can easily chip away health.

Its drones seem to act somewhat similar to Nest Keeper’s drones, being on decent number and stat properties.

Theia’s Twister turrets fire Missiles, known as “Hyper Twister Missiles” now Hyperspinner Missiles, with four equally spaced cannons. Unlike Paladin’s Hives, these missiles do not become immobile and continues moving until they despawn or have been destroyed. These missiles deal high damage upon direct hit against a tank, while the bullets can slowly chip away health when continuously hitting tanks.

Its Square drones seem to act very similar or identical to Summoner’s drones. They have low health and deal low damage individually, but they come in large numbers that can easily overwhelm tanks.

Nyx's Rocketeer Rockets act like the player's version except they seek out their target like Ragnarok's Gunner cruisers. They have descent damage like Zaphkiel's skimmer missiles, while being accelerated to high speed.

It's spawner minions are extremely strong and dangerous. They come in huge numbers and every single one of them have very high health, even with several annihilators. Bullet damage of minions are also fatal, instantly overwhelming any tank and surrounding from all sides. 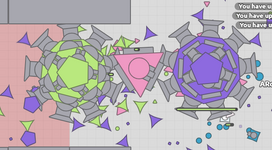 Freyja and Paladin with an Elite Destroyer between them. 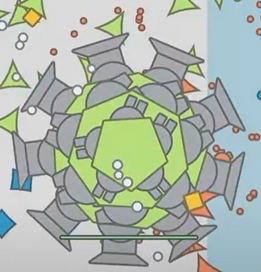 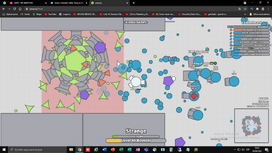 Freyja entering to fight the tanks. 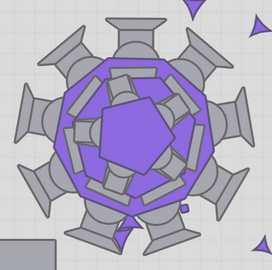 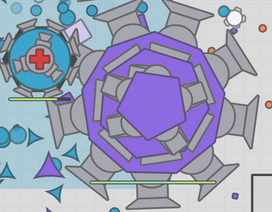 Another image of Paladin.

Paladin, Freyja, and Zaphkiel about to attack a Sanctuary. 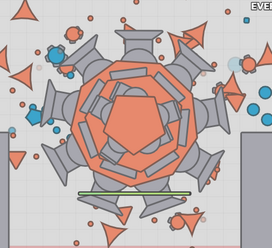 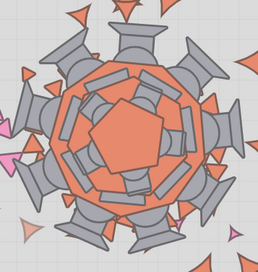 Another image of Zaphkiel, without attacking. 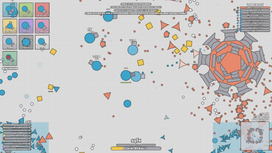 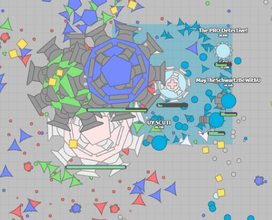 Freyja, Paladin, and Zaphkiel in Siege attacking a Sanctuary. 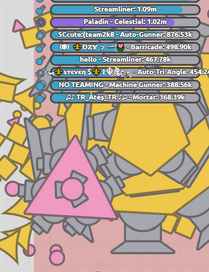 Theia with an Elite Sprayer 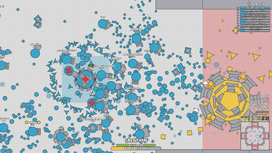 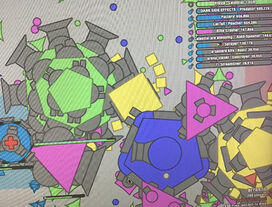 Freyja and Theia near three Elite Crashers, a Nest Keeper and a Summoner. 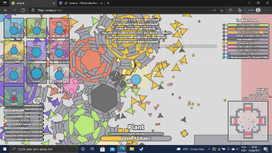 The four Celestials, along with a Rogue Palisade and an Elite Battleship. 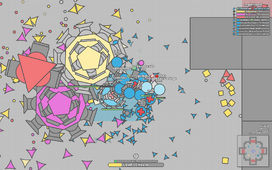 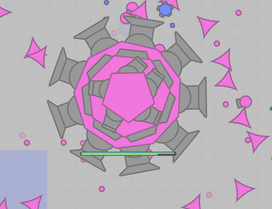 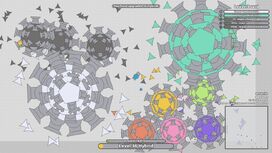 Every Celestial in the game currently, including the Rogue Celestials, Ragnarok and Kronos. 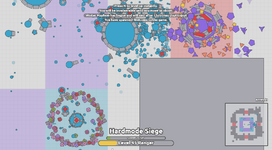 Paladin as the Nutcracker on Winter Mayhem 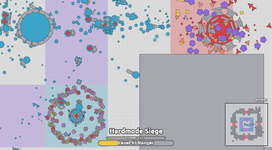 Nyx as the Elf Commander in Winter Mayhem

Santa (Zaphkiel) as the Sleigh in Winter Mayhem 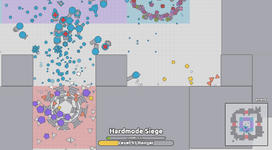 Theia as the Yeti in Winter Mayhem 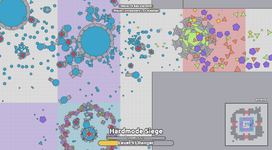 Freyja as the Grinch in Winter Mayhem 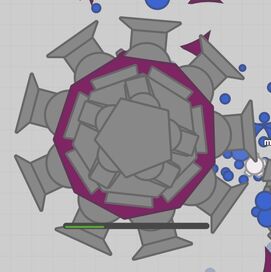 Paladin during a visual bug where all turrets were displayed as grey.