This article is for the Arras.io Constructor. For the original Diep.io equivalent, see Mega Trapper.

The Constructor is one of the current Arras.io Tier 4 Tanks that can be upgraded from either the Builder or the Destroyer and may not upgrade any further. Its upgrade keys are Y (Builder) and H (Destroyer).

The Constructor features a circular tank body as a base with a large Launcher mounted at the front of the body. Unlike the Diep.io Mega Trapper, the Traps have four points instead of three and are called Blocks. 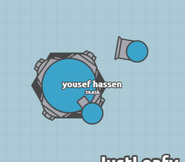 Constructor and its traps.

Constructor and a few Polygons.