This article is for Crashers in Arras.io. For the original Diep.io equivalent, see Crashers.

Crashers are small, pink triangles that chase players around. Their health, shield, and body damage depend on their size. 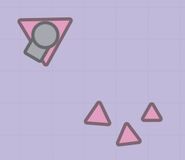 A Sentry near some Crashers
Community content is available under CC-BY-SA unless otherwise noted.
Advertisement