This article is for Arras.io Dominator. For Diep.io equivalent, see Dominator.

The Dominator, also known as Bases in Assault Game Modes, are AI-tanks exclusively found on Domination and Assault. They serve as game mechanics and for win condition on all three game modes. There are three types of Dominators found in the game: Destroyer, Gunner and Trapper variant.

All Dominators feature a black hexagon base underneath their circular bodies.

The Destroyer Dominator has one barrel overlapped with a trapezoid on its base, and shoots Destroyer-sized bullets. Its bullets are nonetheless stronger than an Annihilator’s. Its FoV is bigger than that of a Gunner Variant.

The Gunner Dominator has three small barrels arranged in a similar fashion to a Triplet and overlapped with a trapezoid base, shooting Nailgun-sized bullets. It has the smallest FoV out of all the dominators.

The Trapper Dominator has 8 trap launchers arranged evenly all around its body. It only produces traps when a player (friendly or hostile) is within its FoV.

All Dominators are completely immobile, staying only on one spot. However, they have massive health and body damage to counter this, having around 400 HP and 12.5 body damage, as well as strong weaponry to defend themselves. These weapons are much stronger than the tanks that use them.

In Domination, Dominators start out as contested and part of the Polygon team. The main goal for the players is to attack and capture them. Once their health has been depleted, they will become part of the team that destroyed it, regaining full health again. If a captured Dominator has been destroyed, it becomes contested again. Recently destroyed Dominators often become small, but eventually grow back to their original size. Usually, capturing at least three Dominators is the requirement to win the game.

In Assault, a Dominator only appear whenever a Sanctuary of the green team has been destroyed, taking its place. Unlike Domination, destroying a Dominator or Sanctuary directly converts them to the other team. Blue dominators are also weaponless, although "repairing" them (recapturing them by the green team) will turn them into one of the three Dominator variants, and subsequent destructions and repairing will not change their weapons aside from becoming weaponless when being part of the blue team. At least three Dominators and/or Sanctuaries must be defended by the green team for 11 minutes, with one of them being the latter. If the blue team manages to capture at least two Dominators, the timer for the green team’s victory will be stopped, and will reset back to eight minutes when gaining control of at least thee of them again.

In the previous and similar D-Day game mode, a total of five Dominators were scattered around the red team’s maze like area, with each variation appearing at least once at any game round. They were initially part of the red team, with one at the spawn point. Similar to the green team’s role in Assault, the red team must defend at least four of them from the blue team for eight minutes, while the blue team would win if the main Dominator had been destroyed. Similar Dominator behaviors from Assault also applied in this game mode, including weaponless blue Dominators and direct conversion to the other team upon destruction.

In Siege, weaponless Dominators only appear if a Sanctuary has been destroyed by the bosses, becoming yellow and part of the Polygon team. Unlike other game modes where the Sanctuaries appear in, repairing a Dominator will turn it back into a Sanctuary, allowing players to respawn again. It should be noted that the Dominators present in Siege are somewhat slightly more durable than those in other game modes.

Work in teams. For a Destroyer or Gunner Dominator, one teammate can attract the fire and focus on dodging; others take it out quickly. For a Trapper Dominator, align your lines of fire so your bullets do not have to go through extra traps. Although some tanks provide indirect fire that allows you to safely attack a Dominator behind a wall, they are not as efficient.

Since contested Dominators are captured by the team that deliver the final blow, tanks that have high momentary damage output can be used to ‘steal’ a Dominator that is about to be captured by another team. The Manager, the Annihilator, and sometimes the Smashers are examples of such tanks.

The Destroyer Dominator has slow bullet speed and reload. Combining with the fact that it shoots ahead of players predicting their movements, a player can direct its bullets aside by moving about periodically while shooting through the openings. Despite that, one should still be cautious, since its high bullet damage can easily kill even the toughest tanks in one shot. The Sidewinder and Annihilator work great against this variant.

The Gunner Dominator, unlike its counterpart in diep.io, cannot be efficiently overpowered by a single tank, not even a fully powered Annihilator. Prepare to take a few hits when dealing against it. However, its slightly shorter line of sight can be exploited to attract the Dominator from firing at a certain target, leaving it vulnerable against other potential threats.

The Trapper Dominator is less aggressive and much more diffuse in its firepower, meaning that tanks with a high DPS can safely capture it by focusing their firepower on one side. In fact, it is possible for a tank to sneak into its ring of traps, at the risk of taking damage occasionally though. When defending a Trapper Dominator, it offers rather reliable defense, which works particularly well with aggressive tanks such as the Overlord. Beware of Nailgun bullets, which are small enough to slip pass the traps, however.

A Nailgun and six Minions attack while a Factory is distracting a Destroyer Dominator.

A Machine Gunner, which has a large spread, closes in, and a Single shoots from behind.

Even the Single can solo a Gunner Dominator. It is more susceptible to ‘stealing’ attempts though. 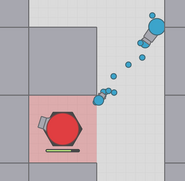 The new AI will think the Sidewinder is behind a wall. The old AI would still fire, but its large bullet would collide with the wall. 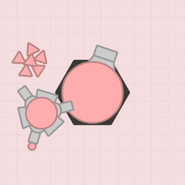 A Destroyer Dominator with a Banshee
Community content is available under CC-BY-SA unless otherwise noted.