Cannons (4)
The Eagle is one of the Arras.io Tier 4 Tanks, that may upgrade from the Pounder or Tri-Angle and not upgrade further. The upgrade key is J.

It features a round body like most of the other Tanks. the Cannon that looks like the Pounder's is at the front (it can be used by right clicking), and 3 Cannons positioned like the Triple Shot are at the back.

This Tank needs to click on the right side of the mouse to use the front Cannon, while left-clicking fires 3 Cannons at the back. Enabling auto-fire by pressing E only affects the back cannons. 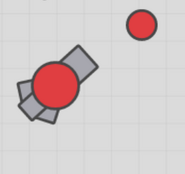 An Eagle shooting the large sized bullet from the front (right clicking would make the Eagle shoot this bullet). 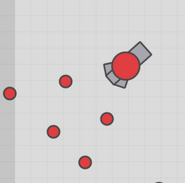 An Eagle shooting bullets from three different cannons on its back (left clicking would make the Eagle shoot these bullets).

Eagle with a Triangle.
Add a photo to this gallery
Tanks (Arras)
Retrieved from "https://diepio.fandom.com/wiki/Arras:Eagle?oldid=462606"
Community content is available under CC-BY-SA unless otherwise noted.