10
The Elite Skimmer is a boss in Arras.io. It has 3 Auto Deployers that shoot Hyper Missiles. It appears as an orange dot on the map.

The Elite Skimmer features an orange triangle and another orange shape with 3 auto deployers which shoot hyper-missiles. They have 4 small cannons on the side in back, positioned like a Fighter's back and side cannons. These are called Hyper Missiles.

Its design is very similar to that of the Elite Sprayer, just orange and has different bullets.

It shoots Hyper Missiles with the size of a Destroyer bullet from its 3 auto deployers that are very strong.

An Elite Skimmer (at the top of the image) with a Bent Hybrid. 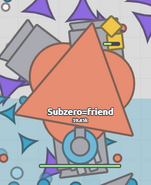 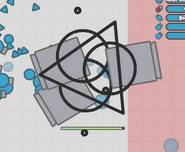 The Ungrateful Soul, the Winter Mayhem version of the Elite Skimmer

A Vector of the Ungrateful Soul