“The sky darkens as the ground slowly begins to crumble... The end is near.”

Kronos is a special Boss type named an Eternal, which is a Celestial with an extra layer. Kronos is found in Arras.io, exclusively at Siege. It is one of the three possible final Bosses of the game mode, the others being Ragnarok and Legionary Crasher. It was officially added on July 13th, 2021.

Kronos, being a final Boss in Siege, features a massive health and weapon arsenal that surpasses most of the other Bosses, as well as an incredible size in comparison to them. It has a 1 in 3 chance to be the final Boss to spawn at Wave 34, accompanied with a unique notification saying “The sky darkens as the ground slowly begins to crumble... The end is near.”. Unlike the earlier waves, Kronos directly spawns at the middle of the map. It initially appears small, but gradually gets bigger until its actual size in the span of five seconds. It is also invulnerable during that time, only becoming vulnerable once reaching its actual size and beginning to attack. Defeating it ends the game as victory for the players. Its topmost and second-to-bottom layers spin counterclockwise, while the second-to-top and bottommost layers spin clockwise.

Its Triplet turrets act somewhat similar to the player version, except they have faster bullet speed and higher penetration.

Its Cruiser turrets act somewhat similar to the player version.

The missiles that its turrets at the third layer shoot, called “Alpha Skimmer Missiles” are modeled somewhat similar to Zaphkiel’s missiles, except the side cannons are replaced with trap launchers. The traps are small, but tough. The Missile Cannons have massive range, causing them to fire missiles all over the map making it very tough to restore sanctuaries and the missiles deal fatal damage upon colliding with a player.

Its Trapper auto turrets serve as its defensive weapons. They act similar to the ones used by the Celestials, that being not actively targeting any player, and has some form of “swinging” motion due to the layer’s continuous spinning. The traps they fire are larger, and somewhat slightly stronger.

Kronos Being Defeated by 40+ players

Kronos, spawned by a developer, months before being officially added to the game. Notice the small block projectiles, before they were changed into regular traps.

Kronos within up-close view of a Healer in Siege

A Message to a player who just killed Kronos

Kronos within full view of a Ranger in Siege 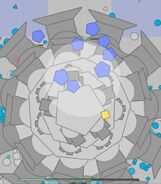 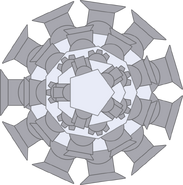