The Nest Keeper has a pentagon body with 5 Twin auto turrets, one in each corner on the outside of its body, with each having the same body color. It also has 5 drone Spawners, one on each side of its body. In the center of its body it has one Boomer turret.

As described in the infobox, the Nest Keeper has:

What not to do 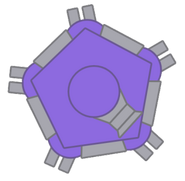 A Nest Keeper with some polygons nearby.

A Nest Keeper and a Rogue Palisade shown on the Leaderboard.

A Nest Keeper in the Maze. 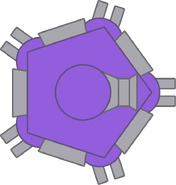 Boss in a Woomy-arras.io and Arras.io
Add a photo to this gallery
Retrieved from "https://diepio.fandom.com/wiki/Arras:Nest_Keeper?oldid=473831"
Community content is available under CC-BY-SA unless otherwise noted.