This article is for the Arras.io Overlord. For the original Diep.io equivalent, see Overlord.

The Overlord is one of current Arras.io Tier 4 Tanks that may upgrade from the Overseer and not upgrade further. The upgade key is Y.

The Overlord has 4 drone spawners on its round body, one pointing at each of the four cardinal direction.

The Overlord produces up to four drones at once up to a total of eight at any given moment. If producing four drones would result in more than eight drones, it will spawn as much as allowed from spawners in the following order of priority: right, back, left, front (front is the direction where the player is aiming).

The Overlord, as its predecessor the Overseer, does not charge, that is it does not 'store' drones corresponding to its number of spawners after it reaches its max number of drones and deploy them immediately upon losing drones. Moreover, the Overlord actually takes more time to spawn drones after controlling eight drones for a certain duration.

As with other Drone tanks, press e to constantly attract Drones to cursor, r to disable auto-attack, and hold the right-mouse-button to repel.

The Overlord retain the Overseer's FoV of 25 1/4 grids in the horizontal direction. 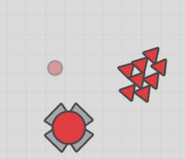 The Overlord with its drones.

How OP Overlords are in maze.
Tanks (Arras)
Community content is available under CC-BY-SA unless otherwise noted.
Advertisement