The Overtrapper is one of the current Arras.io Tier 4 Tanks, which upgrades from Overseer and Trapper at level 45 and doesn't upgrade further. The upgrade key is H for the Overseer, and J for the Trapper.

It features a round body like most of other Tanks, and the 2 Spawners are at back and the Launcher at front.

The Overtrapper gains 2 drone spawners that produce 2 drones from each spawner. Contrary to its original version, the drones are controllable. 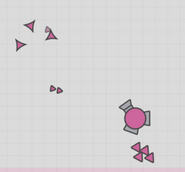 Overtrapper's traps and drones.
Add a photo to this gallery
Tanks (Arras)
Retrieved from "https://diepio.fandom.com/wiki/Arras:Overtrapper?oldid=474921"
Community content is available under CC-BY-SA unless otherwise noted.