This article is for Pentagons in Arras.io. For the original Diep.io equivalent, see Pentagon.

The Pentagon is a type of Polygon found in Arras.io. They are an uncommon Polygon, and are fairly tough and rewarding. They appear as medium-sized blue/purple pentagons and often spawn in company with many other Polygons. They also spawn in the Pentagon Nest frequently.

Pentagons are great XP sources, giving the highest amount of all normal polygons (excluding Alpha Pentagon, Beta Pentagon, and rare Polygons). This is especially useful through the early stages of the game, as they will level up players quite fast.

Unlike the Square and the Triangle, Pentagons have a considerable amount of HP, which can often be dangerous and even fatal to players with low max HP. Builds with high body damage and max HP can take on multiple blows into Pentagons.

The Pentagon Nest can be hazardous for low level/low HP tanks due to the high amount of Pentagons, often creating temporary barriers which they may bump into accidentally. This can be especially notable when Crashers are present, as they can push players into Pentagons, Beta Pentagons or Alpha Pentagons, while also dealing decent damage.

Their high body damage and HP makes them useful strategic traps. If the enemy is suppressed towards the Pentagon Nest or an individual pentagon, there is a high chance, that they will lose very large amounts of HP, making them an easy kill. 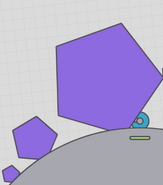 A Pentagon with a Beta Pentagon and an Alpha Pentagon. 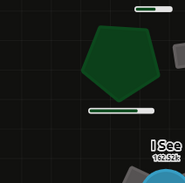 i found this (i was an auto-triangle)