For the non-final Bosses having only three layers for their bodies, see Arras:Celestial.

“The reality comes to an end as Ragnarok finally arrives!”

“Do you believe in Ragnarok?”

Ragnarok is a Boss found in Arras.io. It is one of the 3 current final Bosses of Siege, the others being Kronos and the Legionary Crasher, and thus, it is exclusive to that game mode. It was added on June 5th, 2021, the same day Siege was reworked.

Ragnarok features a multi-layered body similar to the Celestials, but has four layers, starting from topmost to bottommost: pentagon, heptagon, nonagon, hendecagon. The topmost layer has five Gunner Cruiser turrets, which takes the appearance of a Gunner but with swarm spawners on place of side cannons; the second-to-top layer has seven wide Sprayer-like auto turrets that actually fire projectiles in the appearance and functionality of Auto-Smashers; the second-to-bottom layer has nine unique Gem-shaped drone spawners, with the spawners themselves having short trapezoidal shape that goes slimmer away from the layer, opposite to the usual spawner; the bottommost layer has eleven Trapper auto turrets.

Ragnarok, being a final Boss of Siege, has extremely high health and very powerful set of weapons on its arsenal that far exceed most other Bosses, as well as being very large enough to take almost the whole screen when present. It has a 1 in 3 chance to be the final Boss to spawn at Wave 34, accompanied with a unique notification saying “Do you believe in Ragnarok?”. Unlike the earlier waves, Ragnarok directly spawns at the middle of the map. It initially appears small, but gradually gets bigger until its actual size in the span of five seconds. It is also invulnerable during that time, only becoming vulnerable once reaching its actual size and beginning to attack. While growing, it cannot attack players. Defeating it ends the game as victory for the players. Its topmost and second-to-bottom layers spin counterclockwise, while the second-to-top and bottommost layers spin clockwise.

Its Sprayer-shaped turrets act more like a Deployer, as they fire projectiles literally shaped like Auto-Smashers. These Auto-Smashers, called “Auto Smasher” without hyphen, deal fatal damage to anyone directly hit by them, while their auto turret bullets deals low damage, but can continuously do so if they connect to their target. Unlike the playable tank, these projectiles will eventually despawn after receiving enough damage or upon hitting a wall, but otherwise, they continue travelling to the direction they were shot at.

The Gem drones it spawns are extremely tough and very dangerous. They deal high to fatal damage upon collision. The boss can have up to 18 gem drones at a time.

Its Trapper auto turrets serve as its defensive weapons. They act similar to the ones used by the Celestials, that being not actively targeting any player, and has some form of “swinging” motion due to the layer’s continuous spinning. The traps they fire are larger, and somewhat slightly stronger.

Ragnarok in Siege with Dark Theme + Neon Borders from a Factory's field of view.

Ragnarok being attacked by 10-40 players

Ragnarok shown on Death Screen, showing its massive size as compared to the much smaller tanks.

Another image of Ragnarok on default theme, destroying a Sanctuary in the process. 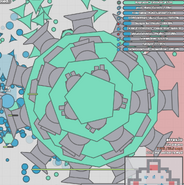 Ragnarok zoomed in on default theme

Ragnarok within full view of a Ranger in Siege

Ragnarok spawning near a Factory