This article is for the rare Polygons in Arras.io. For the Diep.io equivalent, see Green Square, Green Triangle, or Green Pentagon.

In Arras.io, some Polygons may appear as a Rare Polygon variant. All of them have higher health than normal and reward high amounts of XP when destroyed, but spawn extremely rarely across the map. There are currently four confirmed kinds of Rare Polygons known and can be found naturally, each available for Squares, Triangles, Pentagons, Beta Pentagons and Alpha Pentagons, as well as Jewels and Gems that are their own polygons.

Shadow Polygons are distinguishable by their ability to go invisible. Their spawn chance might be 1/100m, and Shadow Squares possibly evolve into Shadow Triangles, and so on. The awarded XP is unknown, but likely very high.

Albino Polygons were distinguishable with their white coloration, which was slightly darker than an Egg. Their spawn chance was unknown (1/50k chance of an already shiny shape turning into an Albino once evolving), and they gave an absurd amount of score when destroyed. Strangely, instead of an Albino Square evolving into an Albino Triangle, it would actually evolve into a Shiny Triangle.

Rainbow Polygons are distinguishable by their color-changing appearance, which is not theme-dependent. Their spawn chance is 1/2,500,000,000 and give massive amounts of XP when destroyed. They do not have a normal evolution pattern, as it does not evolve to the next shape, but either Shiny or Legendary.

A Shiny Square in Siege.

A Shiny Square along with an Egg

A Shiny Triangle within a cluster of other Polygons.

A Shiny Triangle in Assault in mobile interface.

A Shiny Triangle. Compare its size to the adjacent Triangles.

A Shiny Pentagon. Notice how its size as compared to the adjacent Pentagons makes it almost as large as a regular Beta Pentagon.

A Shiny Pentagon being attacked in Siege. 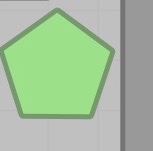 A close-up on a Shiny Pentagon.

A Shiny Beta Pentagon being attacked.

A Shiny Beta Pentagon next to an Elite Destroyer.

A Shiny Beta Pentagon next to a normal Pentagon and an Alpha Pentagon.

A Shiny Alpha Pentagon in a Sandbox server.

Another Shiny Alpha Pentagon in another Sandbox server.

A Shiny Sentry (Move to Arras:Sentry)

A Legendary Square, with its size rivalling a regular Pentagon.

A Legendary Square about to be destroyed.

A Legendary Square next to a ramming Landmine.

A Legendary Triangle that evolved from the Legendary Square from previous screenshot.

A close-up on a Legendary Triangle.

A Legendary Triangle on the Classic theme.

A Legendary Pentagon at the top right of the screenshot. 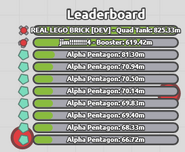 Legendary Alpha Pentagons on the leaderboard that were spawned in by devs.

A Sidewinder Next to a Gem That's About to be Destroyed 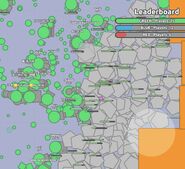 A developer spawning a huge amount of Albino Pentagons.