Not to be confused with the Celestial, which is a slightly stronger Boss that also appears in Siege.

“The darkness arrives as the realms are torn apart!”

Tyr has turrets similar to Elite Gunner’s on its top layer, Productionist minion spawners on its middle layer, and Trapper auto turrets on its bottom layer.

Fiolnir has Beekeeper turrets on its top layer, Swarm Bee Spawners on its middle layer, and Trapper auto turrets on the bottom.

All Rogue Celestial variants spawn very rarely. Their spawning is always preceded by the message “The darkness arrives as the realms are ripped apart!” by a few seconds, announcing their appearance. Unlike other Bosses, they also have a unique message upon being defeated: “A Rogue Celestial has fallen!” as opposed to the default “A visitor has left!”.

If successfully spawned, the Rogue Celestial tends to be spawned outside of the Pentagon Nest, however this is not a guarantee.

Alviss’s Launcher turrets shoot missiles in the likeliness of the playable tank’s version, although potentially stronger.

Its Egg-shaped Swarm drones potentially act in the same way as with other Celestials’, but due to the turrets each having only one Swarm spawner, they aren’t as numerous as them.

Tyr’s Gunner Turrets and similar to that of the Elite Gunner’s but there are 5 of them instead of 2.

Its Spawners, called Productionist minion spawners, make fast minions at a decent rate, but those minions are temporary, similar to the Swarm drones seen on tanks like Carrier. They also try to ram their target instead of avoiding that like other minions.

Fiolnir’s “Beekeeper” turrets shoot powerful bullets that have auto-turrets on them. The side turrets do not shoot, but the Auto Turrets on the Bullets do.

Its Bee Spawners can also make it difficult to avoid and can easily overwhelm players, in addition to the Auto Bullet’s Bullets.

Against the Rogue Celestial

An Eagle that initially spawned on top of Alviss.

Fiolnir from a Predator’s field of view in Portal 4TDM 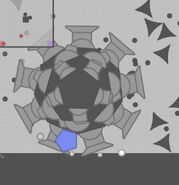 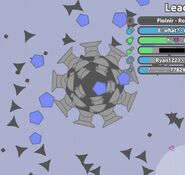 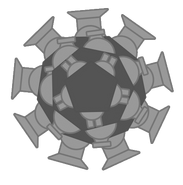 Tyr. Notice how the Productionist turrets are aiming, while the Gunner turrets are not. This is because of the turrets insane FoV.
Community content is available under CC-BY-SA unless otherwise noted.
Advertisement