???
The Rogue Palisade is a boss found in Arras.io that was first sighted on June 2nd, 2018. The tank is also available to be battled. When spawning, players are notified of when it spawns or dies. It appears on the map as a black dot and is larger than a Dominator. It can have a maximum of 12 minions and its trapper turrets are permanently set to auto-fire mode. The Rogue Palisade naturally has auto-spin enabled.

The Rogue Palisade has a huge black hexagon as its base with 6 factory barrels on its sides and 6 trap launcher turrets on the corners. 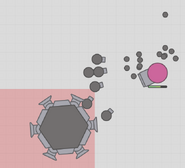 A Palisade being controlled by a developer battling a Skimmer

A Rogue Palisade shown on the Leaderboard along with a Nest Keeper. 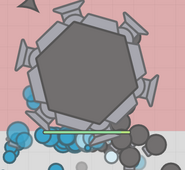 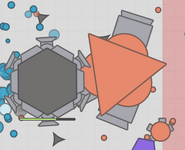