This article is for the Arras.io Spike. For the original Diep.io equivalent, see Spike.

The Spike is one of the current Arras.io Tier 4 Tank upgrades that may upgrade from the Smasher. The Spike may not further upgrade as it is at the end of its tank branch. The upgrade key for it is U.

The Spike features a circular tank body as a base, with twelve black spikes rotating around it like a sawblade.

The Spike, as an upgrade to Smasher, is a melee class. It is slightly slower than other smashers, but its Body Damage is increased, and it also gains a new ability exclusive to the Spike. It can bounce off upon colliding with another Spike on the same team, causing them to fly off a distance with fast speed. The directions usually depend on which side they bumped to each other, and the Spikes need a certain motion speed to activate it. The ability can be disabled by turning on Override (R key by default). If either Spikes have override enabled or are enemies to each other, the ability will not activate.

The Spike is notably one of the few tanks that cannot be used in Siege.

distracted by other things. 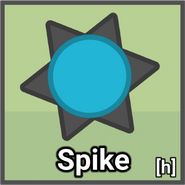 The original Mockup of the old Arras Spike, which resembles the Woomy-Arras.io Booby Trap.

A Spike stuck in the wall
Tanks (Arras)
Community content is available under CC-BY-SA unless otherwise noted.