This article is for the Arras.io Spreadshot. For the original Diep.io version, see Spread Shot.

The Spreadshot is one of the Tier 4 Tanks in Arras.io that is able to upgrade from the Triple Shot at Level 45. The Spreadshot may not upgrade any further as it is at the end of its tank line. Its upgrade key is U.

The Spreadshot features a circular tank body as a base. Compared to the Triple Shot, the side Cannons are shrunk, and there are eight additional side cannons (four are added on each side), with two of them added between the side-most and center cannons. The two side cannons are overlapped by the other additional cannons, with the center cannon layered above them all.

Compared to its predecessor, the side cannons will shrink with the addition of eight extra cannons, whilst the center cannon remains the same. When firing, the central cannon fires first, followed by the next side cannons on an outward spread. Once the last two side cannons fire, the center cannon fires again to repeat the cycle. Repeatedly toggling Auto-Fire on and off may make the Spreadshot have some of its bullets stacked and fired at the same interval. 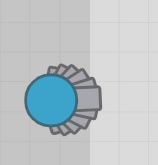 The previous appearance of Spreadshot shooting.