Cannons (1)
Launcher (1)
The Trap Guard is one of the current Tier 3 Tanks in Arras.io that may upgrade from the Flank Guard or Trapper at level 25. The Trap Guard may further upgrade into the Bulwark, Gunner Trapper, Bomber, Bushwhacker, or the Conqueror classes. The upgrade keys for this tank are H (from the Flank Guard) and I (from the Trapper).

The Trap Guard has a circular tank body as a base. It has one Cannon on the front of the tank, and one Launcher on the back.

Upon upgraded from the Flank Guard, eliminates the back two Cannons and replaces them with one Launcher on the back. Upon upgrading from the Trapper, the Launcher moves to the back and adds a Cannon. The two weapons have thoroughly average statistics for their types.

As the Trap Guard

Against the Trap Guard 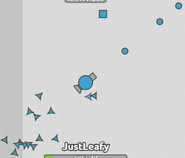 A Trap guard shooting Traps from its back and Bullets from its front.