Cannon (1)
March 4th, 2019
The Twister is one of the Tier 4 Tanks in Arras.io that upgrades from the Launcher and doesn't upgrade further. Its upgrade key is U.

It features a round body like most of the other Tanks, and it has a launcher that shoots spinning missiles that look a lot like diep.io Flank Guards.

It fires Missiles, which have 2 short Cannons like the Diep.io's current Skimmer. The Missile rotates clockwise whilst moving, and shoots a Bullet from each Cannon repeatedly.

Its FoV is roughly that of the Overseer's.

Twister and the Polygons. 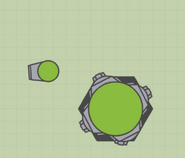 A green Twister in the green spawn of 4TDM. 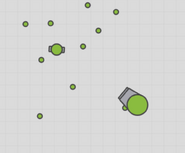 Twister shooting its tiny missiles that have two cannons that make it shoot bullets.
Add a photo to this gallery
Tanks (Arras)
Retrieved from "https://diepio.fandom.com/wiki/Arras:Twister?oldid=479270"
Community content is available under CC-BY-SA unless otherwise noted.