Not to be confused with the Diep.io Necromancer, which has a near identical design.

The Underseer is one of the current Tier 3 Tanks in Arras.io that branches off from the Director. The Underseer may further upgrade into the Necromancer and the Maleficitor. Its upgrade key is I.

The Underseer looks like the Necromancer from the original Diep.io. As such, it has a square tank body as a base and two Spawners on its sides.

Upon upgrade, the Underseer replaces its Drones with Necro Drones, which are square Drones weaker than its triangular cousins but possess the unique ability to convert neutral Squares into one of theirs by colliding with them. The Underseer's Reload is very slow (~2 Drones / 9 seconds). Each spawner has the lowest reload in the game, more than twice as long as an annihilator's. Notably its 7th Stat, though displayed as "Respawn Rate", does not actually increase respawn rate but increases Max Drone Count. Its effect is as follows:

The Underseer has 25 1/4 grids of horizontal FoV, same as the Overseer. 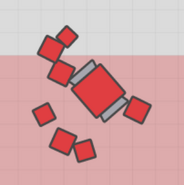 Underseer and its Drones.
Tanks (Arras)
Community content is available under CC-BY-SA unless otherwise noted.