This article is for the original Diep.io Auto 3. For the Arras.io equivalent, see Auto-3.

The Auto 3 is a tank that was released unnamed on August 2, 2016, and was later named on August 5, 2016. It is one of the four current upgrades from the Flank Guard and can be selected at Level 30. It may further upgrade into the Auto 5 or the Auto Gunner.

The Auto 3 features a circular body with three Auto Turrets spaced at 120-degree angles around the tank. These turrets slowly move with the tank whether it’s moving or not, similar to the Auto Smasher, Auto Gunner, Auto Trapper, and Auto 5’s turrets.

⬇
The Auto 3 has 3 Auto Turrets that are automatic and fire at anything in its view range. The Bullets will prioritize tanks over Polygons or Crashers. They are twice as weak as the Flank Guards'. Turning on Auto Fire will allow you to control the turret closest to your cursor. Each turret has a 120° field of view, meaning only a maximum of 2 turrets can fire at a single enemy, and moving your cursor around the tank with Auto Fire on changes which turret you control. Turrets can also be controlled by clicking and holding. Holding Shift or Right Click will make the 1-2 closest turrets point away from the cursor. The turret’s range is slightly greater than the player’s field of vision. For both this tank and the Auto 5, Auto Spin is automatically on. 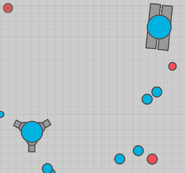 An Auto 3 in TDM with a Twin Flank. 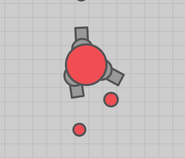 A red Auto 3 shooting. Notice that the guns are at different angles.