This article is for the Diep.io Auto 4. For the Arras.io equivalent, see Arras:Auto-4.

The Auto 4 (also called Auto Tank in-game) is a removed Tier 4 tank that upgraded from the Gunner and cannot upgrade further. Released on August 2nd, 2016, it was removed later that day, in the update that added the Auto 3 and Auto 5.

The Auto 4 features a circular body with four Auto Turrets evenly spaced around the tank. These turrets slowly rotate with the tank when moving or not, similar to the Auto Smasher.

The Auto 4 was extremely similar to the Auto 3 and the Auto 5 but had four Auto Turrets instead of three or five. Its Turrets’ positions make it possible to aim with two Turrets at one target. There was no change to the bullet stats. Auto 4 would probably be played in the same way that the Auto 5 and the Auto 3 would, as it is practically the same thing, only being split up into 2 tanks, the Auto 5 and Auto 3 later on. 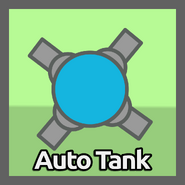 How an Auto 4 in game looked like.
Add a photo to this gallery
Tanks (Diep.io)
Retrieved from "https://diepio.fandom.com/wiki/Auto_4?oldid=473875"
Community content is available under CC-BY-SA unless otherwise noted.