This article is for the original Diep.io Auto 5. For the Arras.io equivalent, see Auto-5.

Not to be confused with the Auto 3, the unupgraded form of the Auto 5.

The Auto 5 has a design similar to the Auto 3, except for the fact that it has two additional Auto Turrets for a total of 5 Auto Turrets, hence its name. Its Auto Turrets are evenly placed around its body at 72-degree intervals. 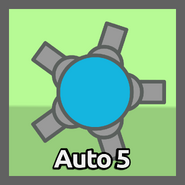 An Auto 5 in action in Sandbox