The Auto Gunner features a circular base with four small Barrels in the front; the outermost two are significantly shorter, and they are placed slightly under the main ones, which makes them look twice as thin as the middle Barrels. It also has an Auto Turret that automatically fires Bullets at anything that comes into its Field of View.

Base Stats
(compared with Gunner’s Bullets)

As the Auto Gunner

Against the Auto Gunner

On the first few hours of the November 19th update, players could control the Auto Turret of the Auto Gunner and other Tanks that used Auto Turrets. This feature was swiftly removed shortly after release, however.

The Auto Turret is not shooting at the Dominator. 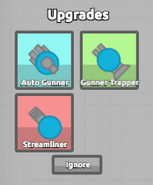