This article is for the original Diep.io Ball. For the Arras.io equivalent, see Arras:Ball.

The “Ball” was an unnamed class which was secretly added on 13th January, 2017 and removed the same day. The reasons for addition are unknown, due to its odd design and the fact that it was only accessible in Sandbox. Unlike the removed Mounted Turret, however, the player cannot control other player’s Auto Turrets during the update. This suggests that this tank is not related to the Mounted Turret. The only way to access the “Ball” while it was in-game was to press \ once in Sandbox; no other way to access it was discovered and it did not appear in the Class Tree. Its Tier is also unknown.

The “Ball” was simply a circle with no Barrels, Spawners or any type of offensive weapons. It looked exactly like the Sandbox version of the Mounted Turret.

This tank, while it existed, was a superb Body Damage class, and could defeat a Spike with fully upgraded health and body damage and only lose 30% of its health, however, it was especially susceptible to rapid-fire Bullets and Drone classes, due to its inability to counter them or to closely engage.

Since the Ball had no barrels, it was technically useless upgrading the bullet stats. However, after maxing the other stats, 5 points are still left unused. If the player was daring enough to play the Ball, they would have to use their last five upgrade points on bullet stats or leave them unused. 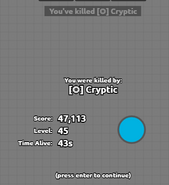 Proof that you can kill yourself and another person simultaneously (with o) with this tank.
Tanks (Diep.io)
Español Tiếng Việt 中文
Community content is available under CC-BY-SA unless otherwise noted.
Advertisement