This article is for the original Diep.io Battleship. For the Arras.io equivalent, see Arras:Battleship.

The Battleship is one of the current Tier 4 choices for the Overseer and Twin Flank that can be selected at level 45. Upon upgrading, the tanks’ weapons are replaced with four Modified Spawners that can be toggled on and off. The class was added on August 28th, 2016.

The Battleship features a blue circular base, while essentially looking like the Twin Flank, but using Spawners instead of barrels.

Base Stats
(compared with Overseer)

Base Stats
(compared with Twin Flank) 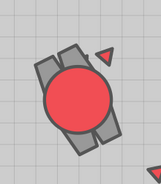 A Battleship at a glance 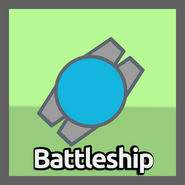 The green themed upgrade that Battleship gets when upgrading from Twin Flank.

An Overseer, Manager, Auto-Gunner, and Battleship (most importantly) in a Raider Group.

This time, an Overseer, Battleship, and Tri-Angle in a Raider Group.
Add a photo to this gallery
Tanks (Diep.io)
Retrieved from "https://diepio.fandom.com/wiki/Battleship?oldid=475904"
Community content is available under CC-BY-SA unless otherwise noted.