This article is for the original Diep.io Booster. For the Arras.io equivalent, see Booster.

For the Boss based off of this tank, see Fallen Booster.

The Booster is a Tier 4 tank that was released on June 3, 2016, unnamed, and was fully released on June 4, 2016. It is one of the two tanks that Upgrade at Level 45 from the Tri-Angle. It cannot upgrade further.

It has a total of five Barrels. Four of them are at the back with two pairs close together made for the accelerators which shoot weak Bullets and one Barrel in front of the tank which does moderate damage. The angles between Booster Barrels clockwise from the front cannon are: 135º, 15º, 60º, 15º, & 135º.

The only visible feature that differs from the Tri-Angle is that it has two more Barrels on the back, and is, therefore, faster, because of recoil.

⬆⬆
Upon upgrading, this tank adds two barrels at the back, further increasing its recoil and by extension, while shooting, Movement Speed. The Barrels at the back shoot weaker and faster Bullets that last only for 1.5 seconds instead of 3 seconds. This tank has recoil that speeds the tank up while going forward when shooting but has a horrendous backward Movement Speed while firing because the Booster’s back barrels work against the tank’s reverse thrust. 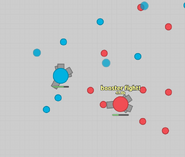 Two Boosters fighting each other in Sandbox. Notice the yellow names. 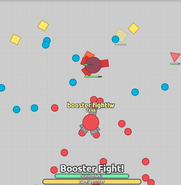 A Booster being chased by a Booster in Sandbox.

The Booster using its recoil to gain speed.

SVG file of a Booster