This article is for the original Diep.io Developer. For the Arras.io equivalent, see Arras:TESTBED.

The Developer is an unclassed tank in Diep.io that was originally part of the cheats suite made by the creator and former developer (also called Zeach or M28) himself. He stated that he accidentally left the cheats without a password, so some people could have exploited the developer mode to obtain an extremely large tank or developer cheats. The Developer can also go over the normal limit of Level 45, presumably the method by which the Developer can become so large.

The fourth report which seems to be unedited shows a big developer tank messing around. Even if it wasn’t the developer, it at least proves that the massive tanks are run by hackers.

The first reports of this tank were on August 28th, when it mysteriously appeared in a server with few people. They said he was a huge tank with a yellow name “Developer” above it. They said it was a Machine Gun, then became a Sprayer, then a Stalker, and eventually left.

This day, the developer of Diep.io says that he accidentally left some developer cheats without a password. It is still unknown if this has been patched or not.

When Sandbox mode launched, people said to be finding unknown (likely Stalker) invisible entities with apparently infinite health, and when they ram into it, they get killed and the object is still invisible. The death screen said: “You were killed by Developer”. Apparently by cheating, as when there are more than 2 people in a Sandbox server, God Mode is disabled. When they checked back 5 minutes later, it was very laggy and the game froze. At the start of the video, though, they were able to change to god mode and this shows that this was probably recorded before the update, and is fake.

The fourth report, which seems to be unedited, shows a big developer tank messing around. Even if it wasn’t the developer, it proves the huge tanks are trolling hackers.

In this report, Zeach had made a recent return to the Reddit, posting for the first time in months. Shortly after, a large Landmine was seen in a server in the pentagon nest.

This report shows a player joining an FFA server, and the leader was named "Dev". When they got closer, there was a developer tank shooting erratically.

It still could be possible, since the Developer names himself Developer, but the post shown here was originating from a post saying that there was a large tank named “Algebra” in a different game mode. 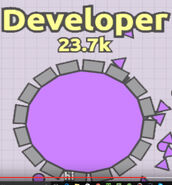 A Developer in TDM using a Mothership

A Developer tank using the Predator while being damaged