As of the August 26th update, 2 new types of Dominators were added, bringing the total up to 3. See them below.

All Dominators feature a circle as their bodies and a hexagonal base, like the Smasher but the Dominators have weapons, and are much larger and much tougher. Their colors are dependent on which team captures it, but the base is always black.

The Destroyer Dominator is equipped with a short, wide cannon in front that has a small trapezoidal base, similar to the Ranger.

The Gunner Dominator has three cannons in front. The cannon in the middle is longer and wider than the other cannons but shoots the same bullets, similar to the Triplet.

The Trapper Dominator is surrounded by eight equal-sized launchers. Each launcher faces a different direction, but they are evenly spaced. Its circle of Traps defends it from all sides but such protection has a very limited range and is weaker against tanks with focused bullet fire. It is also called the Octo Trapper Dominator.

Dominators can’t move (except the now-removed Sandbox Versions) and have 6148 (6000-6088 in Sandbox) health points (per Dominator) with weak healing factors. Note that the health increases by 2 every level (including level 1), like other tanks. It does not have upgrades and has a base health of 5998. The regeneration rate is the same for all Dominators. Their field of vision is at least a bit larger than the Sniper. All Dominators, including the Sandbox versions, suffer no recoil.

This Dominator’s FoV (Field of Vision) is about the same as the Hunter’s. It is surrounded by eight Launchers. Its trap speed is higher than a maxed Tri-Trapper’s, while its trap health and damage is about the same as a Trapper with 12 points in penetration and 5 points in damage. Also, its reload is the same as Trappers with 0 points in reload and Auto-fire is always on, with no exceptions.

This Dominator’s FoV is about the same as the Hunter and its upgrades (not including the zoom out on the Predator). It has three cannons in front. Its reload is high and the bullet speed is normal. However, it has low bullet penetration and damage.

This Dominator’s field of vision is slightly greater than a Sniper’s. It has one Cannon in front and very high Penetration, being 5 times greater than a Mega Trap’s, and a Bullet Damage equivalent to a basic bullet with 21 points in damage. It has the bullet size of a Hybrid. Also, its bullets can be knocked by enemy bullets or drones. However, its Reload is about that one of Hybrid with 3 points in the respective stat and Bullet Speed is lower than a Hybrid or Destroyer.

Dominators can harm shapes, but they cannot when neutral. They will also not target players out of their field of view unless provoked. Interestingly, they will not target back if you harm one when using a tank that has a higher range than the Assassin.

Dominators prioritize players but if there are no players, they will target Polygons, Bosses or Arena Closers.

If the game is over and you manage to decrease its health to 0, it will be contested. However, it won’t change the winner.

In Domination, these tanks are used as control points. They start neutral, but any team can capture it by lowering its health to 0 and being the last team to shoot it. Once the Dominator is under that team’s control, it can no longer damage that team. The team can shoot through the Dominator, but the enemy still can’t.

As of August 25th update, if you press H before other players do, you will take control of a randomly selected (and uncontrolled) Dominator on your team, at the cost of losing the control of your tank, which will be destroyed slowly. A recent update added a Dominator in the center of the Tag Mode map but capturing it was not essential to win. However, it was removed soon after.

Similar to the Destroyer.

Similar to the Gunner tank.

The best strategy is to swarm the Dominators. Your team should attack with all single-point troops (such as the Triplet or the Destroyer) and guard with crowd control troops (such as the Octo Tank or the Spread Shot). The “point troops” will cause massive damage to the Dominator while the crowd controls will prevent the opposing team from recapturing it.

If you want to attack Dominators without risking yourself from being near to them, a Ranger with few points on Bullet Speed is a good choice. You can simply attack the Dominator without having to go near it, thanks to high FoV of your tank and decent Bullet Speed, although it would take time to do this by solo, especially against Trapper Dominators, as you have to change positions sometimes.

As and/or defending a Dominator

As an Octo Tank, an effective tactic is to stay in the middle of a Dominator and shoot enemies. Another strategy is to use Max HP, Health Regen, Reload and Bullet Damage. Get to the opposing side’s Dominator and use one side for the Dominator and the other for the other tanks.

Two tanks with high Reload and Penetration could move a Dominator’s Bullets and not get hit like Triplet and Gunner or any high Reload classes.

If you like to stay hidden, use the Manager or the Stalker. Just camp out at your base and protect a Dominator. A great tip for using the Manager is that you get a glass build (max Drone Speed, Penetration, and Damage) and hide your Drones in the middle of the Dominator, thus making the Dominator appear alone if no players are roaming around. However, enemy Dominators can see hidden tanks, so don’t think you can get away with it. Be extremely cautious when you’re camping near your Dominators, as most tanks that capture Dominators are usually Penta Shots, Sprayers or other spray-and-pray tanks. The massive amount of Bullets fired from these tanks can unintentionally hit you, forcing you to relocate your camping zone, otherwise, you will be destroyed.

If you are a Dominator, keep your mouse close to the center. That way you can rotate faster. 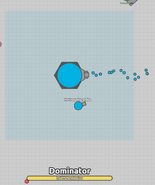 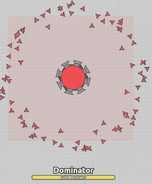 A Gunner Dominator in Sandbox mode 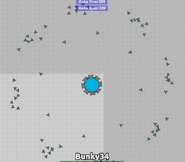 A Trapper Dominator in Sandbox mode

A Destroyer Dominator in Sandbox Mode 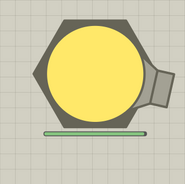 A neutral Dominator (contested by the HP bar) 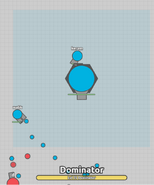 Dominators can be player-controlled 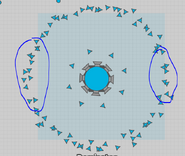 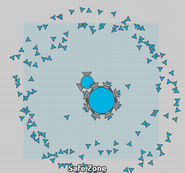 Trapper Dominator alongside a Tri-Trapper 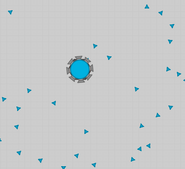 A Trapper Dominator in Sandbox

The old design of a Dominator

Fighting a Dominator in the mobile version of the game