Not to be confused with the AI-controlled Base Drones or Crashers.

Drones are weapons used by the Overseer branches and the Hybrid. Most drones look like smaller versions of Triangles, with the only exceptions being the Necromancer’s Drones, which are tinted Squares, and the Factory’s, which look like small Arena Closers.

All Drones (with the exceptions of Hybrid’s and Overtrapper’s AI-controlled ones and the Factory’s Minions, which exhibit more complex behavior) can be controlled via left-clicking or by pressing E to enable Auto-Fire. This forces them to follow the player’s cursor. Right-clicking or pressing Shift will force drones to move away from it.

If not controlled, all the Drones regardless of their type will automatically seek the nearest enemy in their immediate area. If no target is available, they’ll become "idle" and passively orbit around their tank.

The Mothership and the Battleship present both controllable drones and uncontrollable Drones. (Presumably, due to their exceptionally high Drone Count). The latter, automatically protecting the tanks from enemy users.

Note: When a tank with controllable drones uses Auto Fire and Auto Spin simultaneously, the Drones will orbit the tank uncontrollably unless either auto function is off.

Drones are affected by these Stats:

Note that in Factory’s case the mentioned Stats also modify these Traits:

Tanks that use controllable Drones are:

Tanks that use uncontrollable Drones are:

Bosses that use Drones are:

Their drones, also known as Partisans, are only accessible by the Battleship and Mothership. They are aesthetically the same, except:

These drones, also known as undead drones, are only accessible by the Necromancer. They are essentially the same, except:

These Drones are exclusive to the Factory. They are also known as Minions. They present some singular characteristics in the sense that: 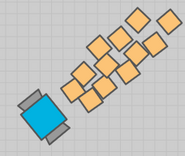 Necromancer with some of its drones 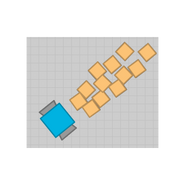 Necromancer with some of its drones (New colors) 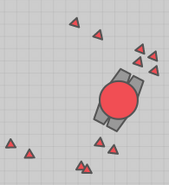 Guardian with its drones

Mothership drones, only right ones are player-controlled (removed)

An Example of Factory Drones and Factory 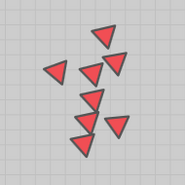