For the playable version of this tank, see Booster.

The Fallen Booster features a light gray circle as its body with five Cannons. One Cannon faces the front (which does low damage) and the other four are paired up on the back (doing even less damage). Summed up, it is just a larger version of the playable Booster with a grey base and AI control. The angles between the Cannons clockwise from the front cannon are 135º, 15º, 60º, 15º, & 135º.

When it goes on the offensive, it attacks by ramming into its target, much like a player-controlled the Booster that is using a Body Damage focused Build. The Fallen Booster doesn't target players that are under level 15 unless provoked. If the player survives for a couple of minutes, the Fallen Booster may ignore the target and attack another tank nearby instead. When there are no valid players that can be targeted, the Fallen Booster will target the nearest Polygon.

It has a big health pool of 3,000, which is the same as all of the bosses. Its Health Regeneration is microscopic, much like a player who hasn’t upgraded that stat at all. It has decent Bullet Speed, high Bullet Penetration, but very low Bullet Damage. Its recoil and Movement Speed is equal to that of a Booster with max Reload but no Movement Speed. Its Field of View is large, likely comparable to the field of view of an Assassin's. Like other bosses, when it hasn’t been attacked in over 30 seconds, it will slowly regenerate all of its health.

Although the Base itself does not harm it, the Fallen Booster is targeted by Base Drones once it comes close to the base. Upon destruction, it awards 30,000 experience to the player who kills it.

Against the Fallen Booster

Close upshot of the Fallen Booster

A Booster being chased by a Fallen Booster

Many Tanks on the red team attacking the Fallen Booster 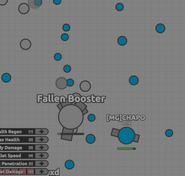 The Fallen Booster on low health

A Fallen Booster attacking another tank