For the playable version of this Boss, see Overlord.

The Fallen Overlord is an AI-controlled Boss that was added on August 20. It has a chance to spawn 10-13 minutes after the server starts, and 15-23 minutes after the previous Boss was destroyed. It behaves similarly to the Guardian and the Summoner.

The Fallen Overlord looks like a regular Overlord, but much larger and light grey. It has four Spawners that spawn Drones.

The Drones act like Crashers but will return to the Fallen Overlord if the target leaves its range.

Its Drones will target the closest tank. It won’t target players under level 15 unless shot at first. If no tanks are nearby, it will target and destroy all Polygons in range, including Pentagons and Crashers. The Drones will stop attacking the target when the target goes out of range.

The Fallen Overlord spawns 8 gray Crasher-like Drones every second, which is much faster than a normal Overlord’s spawn rate, but its Drones have a health pool of 100 HP. It can have a maximum of 28 drones out. Its Drones’ speed is similar to a Battleship’s Drones with max stats. If the Fallen Overlord dies, its Drones will die alongside it similar to every drone user.

This tank has a great health pool, 3,000 health points, but has a slow healing factor. It reloads considerably faster than an Overlord does with maximum Reload Speed. However, it is moderately slow and suffers no recoil.

Upon destruction, it awards 30,000 experience points to the player who killed it. It is targeted by Base Drones and Crashers. A team spawn area (base) has no adverse effects on it.

Against the Fallen Overlord

Fallen Overlord spotted while going onto a new server.

A Fallen Overlord in a team’s base

A basic tank hanging with a Fallen Overlord 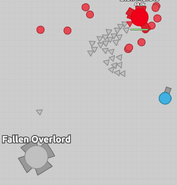 Fallen Overlord without any Drones 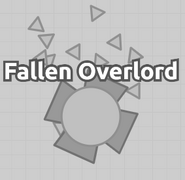