No. Spawns in Fortresses.

This is one of the many Boss Tanks that can spawn in Fortresses. It is the Boss Tank version of the Protector. Idea by Diepmon. Integrated and created off ideas by Zathsu.

He is The Prince's personal bodyguard (that was intended.) 'Nuff said.

The Bodyguard has two circles with Protector shields on the front and two Auto Turrets on the back. The very front and very back have two Lancer spikes mounted on Auto Turrets, situated between the shields and Auto Turrets respectively. 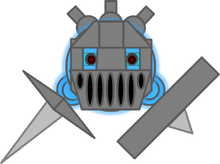 When one shield is destroyed, the lances move to the circle that used to mount the now-destroyed shield and merge into one longer lance while the circles they were previously mounted on retract into the body. The remaining shield becomes indestructible and increases in length by 50%. This is used as soon as the first shield is broken and lasts for the remainder of the battle. Another Auto Turret also pops up between the existing two for a total of three on the top.

The Bodyguard's shields take damage for the body if both of them are still active. If he is hit from behind, damage will still be redirected to the shields. The Auto Turrets constantly fire at tanks. In the second stage, he moves 25% faster and does 50% more melee damage.

Shield Attacks (Used when both shields are active)

Protected Charge: The Bodyguard rotates both shields to the front to form a big shield, and the front spike lengthens slightly. He charges at the nearest tank, dealing medium damage and knockback. The shields protect him from damage, but will receive 20% of the body damage from the rammed tank.

Shield Bash: The spikes rotate around and embed themselves into the shields. The Bodyguard starts extending and retracting his shields at tanks to damage them while protecting himself.

Defensive Stance: The shields, lances, and Auto Turrets duplicate themselves, for a total of four each. They arrange themselves evenly around the Bodyguard, protecting him from all damage. He spins to deter tanks from coming too close, and the Auto Turrets play defense by firing on four tanks at a time (no two Auto Turrets will lock on to one tank.) Only used once.

Raze: The two lances come beside each other in the front and grow to a TREMENDOUS length. However, instead of sweeping it across the room like one might expect, an energy wave 10 tiles long is emitted from the lance that rotates 270 degrees around the Bodyguard.

Single Shield Attacks (Used if one shield is broken)

Royal Training: He starts acting like the Prince (but can't use any of the Prince's abilities) and starts poking tanks while deflecting bullets with his shield. This behavior lasts long periods of time.

Call to Arms: A trumpet sounds as five gray (Fallen Boss-colored) Protectors and five gray Lancers appear. The Protectors set up a barrier while the Lancers chase after tanks. Both kinds of tanks are killable.

Cleave: He swipes the lance in front of him. Tanks hit receive damage, very simple attack.

Pin Down: The Bodyguard releases his shield, causing it to fly into a tank and pin it against the Fortress wall. His lance then flashes gold and stabs the pinned tank (or tanks, if more than one was hit by the shield) unimaginably fast. This does very low damage but hits 10-20 times.

Extreme Evoboost: The Bodyguard sticks his lance straight up and it rapidly flashes white for two seconds, when the Bodyguard releases a shockwave that heavily knocks back tanks but doesn't deal any damage. He then gains the Hasty and Armored buffs for the next 120 seconds. This is used only twice and at less than 30% health (body health.)

SRC
The Extended Tale of Diep Bosses
Retrieved from "https://diepio.fandom.com/wiki/Fanon:The_Bodyguard?oldid=415415"
Community content is available under CC-BY-SA unless otherwise noted.