This article is for the original Diep.io Fighter. For the Arras.io equivalent, see Arras:Fighter.

The Fighter is a Class that was released as an unnamed class on June 3, 2016, and was given a name on June 4, 2016. The Fighter is of of the two tanks that upgrade from the Tri-Angle, the other being the Booster, and as it is a Tier 4 tank it does not upgrade further. This Class was buffed on June 13, 2016 (although the exact changes to the Fighter are unknown).

It has five Cannons; two of them are on the back of the tank (same as its predecessor, the Tri-Angle) two are on the sides, and one on the front. It features a common circular base. The angles between Fighter Cannons clockwise from the front cannon are 90°, 60°, 60°, 60°, 90°.

—
The tank has high recoil that speeds it up when moving in the same direction it fires. Its strongest Bullets are fired by the front gun, followed by the slightly weaker side guns and the much weaker back Cannons, which fires Bullets that last for only 1.6 seconds instead of 3. Upon upgrading from the Tri-Angle it receives a barrel on the left and the right. Its side guns used to have as much reload as the front gun, but they were later nerfed.

The Fighter is best described as a Basic Tank with forwarding recoil (they both share the same stats for their main cannon). Unlike with the Booster, the Fighter’s Side Barrels allow for decent cover when using Bullet Builds. All of the Fighter’s builds fall under one of the following categories: Glass cannons, Bullet Rammers and Rammers; each with playstyles that are distinct to them. 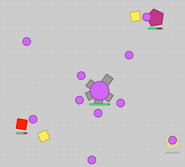 A Fighter on the Purple Team destroying polygons.

The death screen as a Fighter after being killed by a Pentagon.

Another death screen as a Fighter.