The Green Triangle is an extremely rare Polygon in Diep.io, and the third strongest in regards to health. When killed, it rewards 2,500 XP to the player who deals the final shot. It is approximately 10 times stronger than a regular Triangle. The only two Polygons to be confirmed stronger than this one are the Green Pentagon and the Alpha Pentagon. 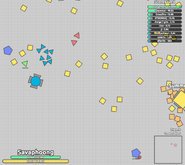 Green Triangle cropped by Jimmy is back

Destroying the green triangle will give you the “Shiny!” achievement.