Guardian of the Pentagons

For the Polygon version of this Boss, see Crasher.

The Guardian of the Pentagons, or simply the Guardian, is an AI-controlled Boss in Diep.io. It has a chance of spawning 10-14 minutes after the server starts and 15-24 minutes after the death of the previous Boss. It rapidly shoots out Crashers at any player above Level 15 unless provoked in its range. It was secretly added on the 18th of August, 2016.

It features a large pink triangle that looks like a very large Crasher as its body. The tank also features a short, trapezoidal Spawner mounted at the back, which spawns Crashers.

It spawns 500 Crashers every minute and each of them has 100 HP. It can have a maximum of 24 such Crashers around. Crashers will chase the first player above level 15 and will lock on until the player moves out of range or if the Guardian is destroyed. The Guardian’s speed and damage are about the same as a maxed Overseer. The Crashers live for about 10 seconds before despawning. The Crashers are also as small as the Mothership's. When the tank dies, its Crashers die alongside it similar to an Overseer’s Drones. The Guardian will not target invisible players or players under level 15 unless provoked.

It has 3,000 health points and it regenerates its health slowly. It also possesses high Reload, but with only one Spawner. Its Movement Speed is fairly slow but significantly increases when it shoots Crashers due to its recoil. Its FoV is slightly larger than the Hunter's. Upon destruction, it awards 30,000 experience and score points to the player who killed it. 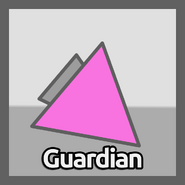 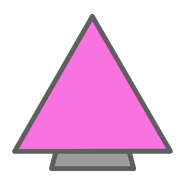 Isolated Design of the Guardian

The Notification that comes up when the Guardian spawns 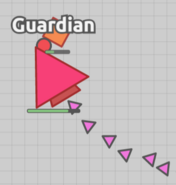 Close-up of the Guardian with its name tag

Another close-up of the Guardian

Death by the high number of Crashers spawned as a Necromancer.

A Penta Shot being attacked by the Guardian