Cannons (2)
Launcher (1)
The Gunner Trapper was released unnamed on July 18, 2016, and was named on July 22, 2016. It is one of the five tanks that branches off the Trapper and one of the three Upgrade choices from the Gunner. It cannot upgrade any further.

The Gunner Trapper features a circular base. It has only two Gunner barrels on the front (but with much more Bullet Damage and Penetration than Gunners) in exchange for a slightly larger Trap Launcher on the back, which has a slower base reload.

Base Stats
(compared with Gunner’s Bullets)

—
The Gunner Trapper has two Barrels and one Launcher giving it access to both Bullets and Traps. The Barrels have a decent Reload while its Launcher has a lower Reload. The Barrels are also slightly smaller than the Gunner’s barrels. Its Bullets have a great Bullet Speed, weak Bullet Damage, and normal Bullet Penetration. Its Traps are slightly bigger than Trapper’s, Tri-Trapper’s and Overtrapper’s, but have the same durability as its siblings’.

As the Gunner Trapper

Against the Gunner Trapper 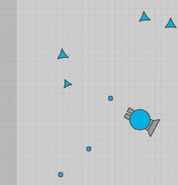 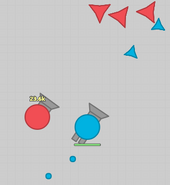 A Gunner Trapper (right), along with a Mega Trapper in Sandbox.

A Gunner Trapper (middle), along with Tri-Trapper, in Sandbox.

A Gunner-Trapper firing alongside a basic Tank