This article is for the original Diep.io Machine Gun. For the Arras.io equivalent, see Arras:Machine Gun.

The Machine Gun is one of the five basic upgrade choices from the Tank and can be selected at Level 15. The Machine Gun may further upgrade into the Destroyer, Gunner at Level 30 or the Sprayer at Level 45 (if the player does not choose an upgrade until reaching the said level).

The Machine Gun features a circular base with a large trapezoidal Cannon on the front.

⬇⬇
The Machine Gun approximately doubles the rate of fire, but decreases Bullet Damage by 30%. In addition, the end of the Cannon becomes wider, making its shots less accurate.

As the Machine Gun

Against the Machine Gun 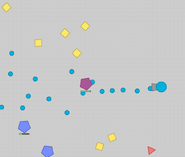