This article is for the original Diep.io Octo Tank. For the Arras.io equivalent, see Arras:Octo Tank.

The Octo Tank is one of the two current final Upgrades from the Quad Tank available at Level 45. It cannot upgrade any further. On July 30th, 2016 both it and the Triple Twin’s projectile health was nerfed.

As the Octo Tank

Against the Octo Tank 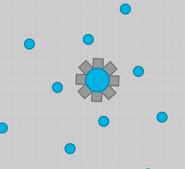 An Octo Tank firing at some Pentagons (Old color scheme)

A close up of an Octo Tank.

Two Octotanks in 4TDM's Green Team, standing by each other whilst inside the base.