The Overtrapper is one of the five current Upgrade choices from the Trapper at Level 45. It can also be reached as one of the six current upgrades from the Overseer. It was added on July 18th and named a few days later. It does not upgrade further.

The Overtrapper features a circular body and has a Trap Launcher on its front. The two Drone Spawners are equidistant from each other and the Launcher, forming an equilateral triangle.

Base Stats
(compared with Trapper Traps)

Base Stats
(compared with Overseer Drones) 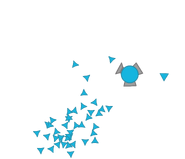 Overtrapper with many traps and a single drone. 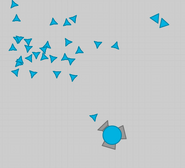 Overtrapper with its Drones (Top Right) and Traps (Top Left). 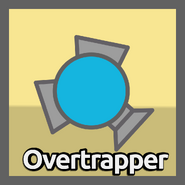