This article is for the original Diep.io Pentagons. For the Arras.io equivalent, see Arras:Pentagon.

The Pentagon is the 4th strongest and most common Polygon around the map in the game. It gives a total of 130 score/exp, in its original form. and has 100 HP, further buttressed with 12 HP in Body Damage. It also has resistance for damage, and it will take 1/3 less damage than normal.

It spawns fairly rarely compared to the Square and the Triangle and is spread out through the whole map. It is rare to see more than 4 of them at once, except when the player is in the Pentagon Nest or in an untouched area, with not much Bullet or Tank interference. It is a stronger polygon than the Square or Triangle, and weaker than its Alpha form and the Green Polygons.

Pentagons are great XP sources, giving the highest amount of all normal polygons (excluding green polygons or Alpha version). This is especially useful through the early stages of the game, as they will level up players quite fast.

Unlike the Square and the Triangle, Pentagons have a considerable amount of HP, which can often be dangerous and even fatal to players with low max HP. Builds with high body damage and max HP can take on multiple blows into Pentagons.

The Pentagon Nest can be hazardous for low level/low HP tanks due to the high amount of Pentagons, often creating temporary barriers which they may bump into accidentally. This can be especially notable when Crashers are present, as they can push players into Pentagons or Alpha Pentagons.

Their high body damage and HP makes them useful strategic traps. If the enemy is suppressed towards the Pentagon Nest or an individual pentagon, there is a high chance, that they will lose very large amounts of HP, making them an easy kill.

A Pentagon with the old color scheme.

A Pentagon with the New color scheme 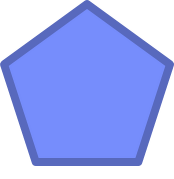